Michael – protection.
I always found driving a little bit scary, especially as a beginner, so I’ve followed my grandmother’s advice and requested extra help ahead of needing it every time I set off on a journey. Call it AA cover, if you like! It’s good to have, because you can’t notch up hundreds of thousands of miles over a lifetime of driving on Britain’s motorways without experiencing some tricky situations. You’ll realise of course that the AA cover I’m talking about is not the Automobile Association either. Here’s one of my stories…

About 20 years ago I was driving in heavy traffic on the M5 stretch between Bristol and London. The lanes were rammed with cars and lorries all going at speed, and as usual, not leaving enough space between each vehicle for safety. I was stuck in the middle lane when a lorry in the slow lane next to me suddenly put his foot down and swerved in literally a few feet ahead of me – he’d seen a small gap and was going for it, but hadn’t increased his speed sufficiently to prevent me from crashing into his rear end - and there was absolutely no time to act. In the next split-millisecond the following happened; hoping to dive into the fast lane I glanced into my wing mirror, but there was no break in the stream of hurtling metal and a red sports car was roaring up on my shoulder so I was very thoroughly trapped.But when my eyes flicked back to the imminent crash situation there was no lorry there, just the car which had been previously ahead of me travelling along sedately. The lorry was now behind me. But there had been no time nor any space for any manoeuvres – in fact I hadn’t even had time to experience any panic. The children in the back of the car were all chattering happily and hadn’t even noticed. It was as if nothing had happened. Which it hadn’t, but it also had. I carried on driving while musing on what, but with a deep feeling that I had just evaded disaster.

My husband Chris has a similar story. He was driving home from a church meeting with a friend and the route took them over one of those crazy narrow humpback bridges you find on B roads here, but as they crested it they were met by a lorry speeding up the other side of the hump. The stone walls of the bridge were literally a foot away from the sides of the car so no passing room at all. Again no time even to panic or pray, but somehow the lorry was suddenly disappearing behind them and they were over the bridge and safe. And puzzled. But safe.
​
I know that bad stuff happens, and I have no explanation as to why some people have accidents and others don’t but I do know it’s nothing to do with worthiness, and everyone’s situation and journey is unique and different. And that’s another puzzle.
But miracles also happen more often than you might think, and there is nothing to stop you asking for AA cover! 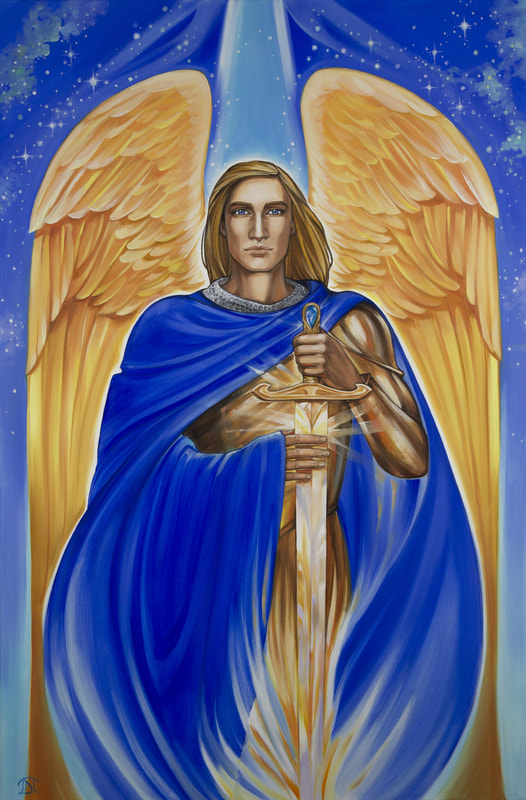 This image is Archangel Michael from my recently completed set for Diana Cooper, published by Hay House March 2021. Image Copyright Jane Delaford Taylor.
An Angel Guardian
This story came from Chris, my husband, and is from a family who were members of his church community some years ago.  Again it’s about a rather dramatic angelic rescue and a lovely reminder of the ever-present guardians we’re all assigned at birth – our own guardian angels.

It was winter and the family were using the electric blankets on their beds that night since the house was so cold.  The parents had put their 3 year old daughter to bed and then gone to their own room to sleep, but some hours later they were woken suddenly by the fire alarm going off.  On a first instinct to check on their child, they opened the door to her room to see the bed ablaze – the electric blanket had caught fire as she slept, and the child was lying still in the middle of the flames. Dashing over, her father scooped her up and the burning blanket was smothered and thrown out of the window.  On the bed itself, there was a perfect outline of the child’s body on the scorched fabric of the mattress – but she had no injuries at all, nor had her dad burned himself during the rescue, which made him feel strongly that there must have been some divine intervention.

A few days later, when they had calmed down enough to talk about it, he asked his little girl what had happened.  She replied simply that her angel had been there, and had told her to lie very still and not to breathe until Daddy came, so that is what she did!  She appeared not to be traumatised in any way by the event at all.
​
I find that very young children have no trouble at all believing in angels, and being so accepting, are much more likely to actually see them.  My husband, who passed on this tale, has always seen them himself, but I’ll maybe come to that in another story! 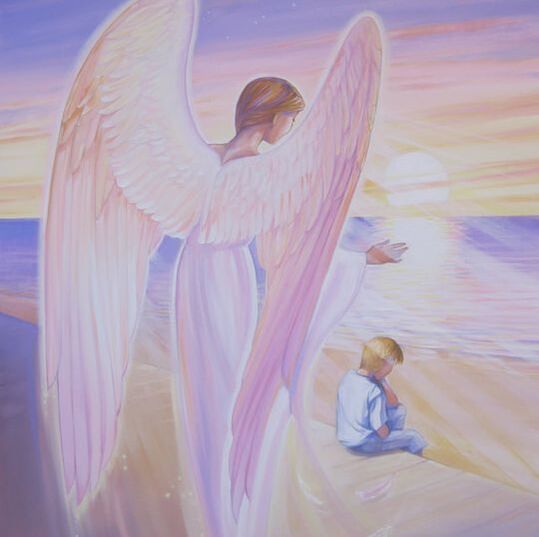 The Guardian Angel depicted here is also from the Archangel Oracle deck by Diana Cooper, image copyright Jane Delaford Taylor.
An Angelic Encounter
Contributed by Louise Fairclough
Do I believe in angels? Well, that's a very good question!
I lived in Norfolk for a number of years and suffered with very severe depression during that time, as a result of being in an abusive relationship. I felt so desperately lonely, and every day for three years I contemplated taking my own life. Yes, it really was that bad!! To sum up those years, and without going into too many personal details, it was like being in ‘total hell’. I remember one special event that occurred back in 2001. I was at my lowest ebb possible and seriously considering ending my life- even to the point of standing on a railway bridge that backed onto my garden, and wanting to jump off it. I managed (goodness knows how!) to drive to Bury St. Edmunds and went to sit inside the abbey. The weather was horrendous that day- dark grey clouds, pouring rain, thunder and lightening- the weather mirroring the emotional turmoil within me. I felt it would be the only place that I would feel safe and where I could maybe find some refuge from the way I was feeling.

I sat there in silence for about 30 minutes and asked God to give me a sign that everything was going to be ok, because I was absolutely terrified. As I sat on the pew with tears streaming down my face, I was seriously doubting that I'd get any kind of sign. However, within about 5 minutes, I noticed that the sun was streaming through one of the stain-glass windows behind me (which seemed to be very unusual for such a dark miserable day). When I turned around, I could see the sun streaming through one of the angel stained glass figures depicted in the window! WOW! Was this my sign!? Being the sceptic, I thought it was merely a coincidence and too good to be true, so I 'tested' God (again!) to give me another sign.... After 10 minutes nothing had happened so I decided to take a look in the gift shop. I opened the door, and the first thing I clapped my eyes on was a book about angels. There was my second sign- and a serious wake-up call that I wasn't alone and never had been! And I've felt an affinity to them ever since.... I looked out of the window and asked the shop assistant if she'd noticed when the sun had come out- she looked slightly perplexed, and replied that she had no idea what I was talking about!! A very profound, yet odd experience.

I am grateful to say that I finally found the strength to leave the abusive past behind me, and I'd like to think that the angelic realms played their part. My interaction with the angelic realms now occurs on a daily basis- with Metatron Colour Healing, Angelic Reiki, Angel card readings- helping both myself and my lovely clients. And I’ve since discovered that the Angel depicted in the stained glass was Archangel Michael! 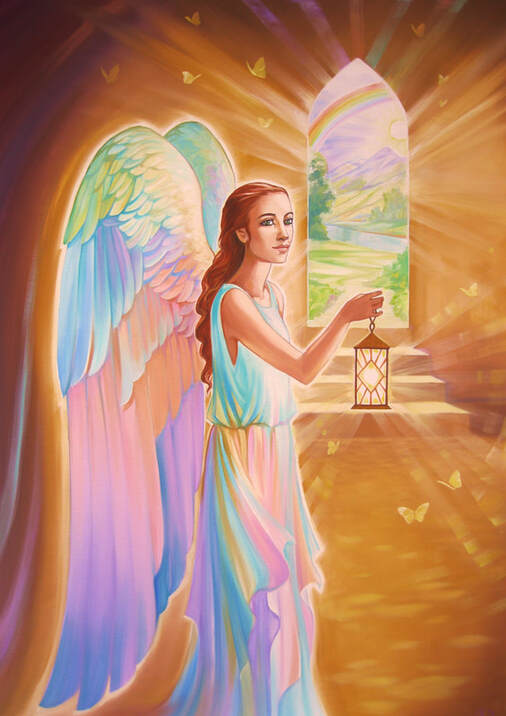